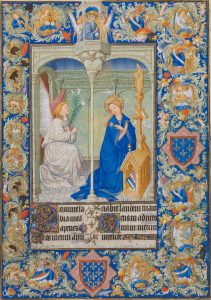 FREE ADMISSION
Followed by a light reception and Solemn Vespers at 5:00 p.m.

Part of the Rosary Concert Series at St. Mary’s,
this concert-meditation will feature the professional Schola Cantorum
For Immediate ReleaseContact: Thomas B. Heckel, Chairman, St. Cecilia SocietyTel.: (203) 656-2389E-mail: theckel51@gmail.comNORWALK, CONN.—St. Mary’s Church and the St. Cecilia Society are pleased to announce a continuation of the popular Rosary Concert Series, dedicated to the Joyful Mysteries, on Sunday, November 4, 2018 at 3:00 p.m. at St. Mary’s Church, 669 West Avenue in Norwalk, Connecticut.The month of November has a special association with church musicians because it contains the feast of St. Cecilia, their patroness (November 22). As in years past, the St. Cecilia Society is sponsoring a November concert featuring the professional St. Mary’s Schola Cantorum, which was founded in 2007 in conjunction with the revival of the traditional Latin Mass in the parish. For over a decade, the Schola has provided fitting music for the Latin Mass at St. Mary’s, including Gregorian chant and great masterpieces of polyphony from the Church’s history, and has become the cornerstone of one of the most admired Catholic parish music programs in the country. The Schola recorded its first CD in 2017, Lux Fulgebit: The Mass at Dawn of Christmas Day, which is also the world premiere recording of a rediscovered Mass setting from 16th-century England.The program for “The Joyful Mysteries” is drawn from a collection of devotional pieces by the German composer Gregor Aichinger (1644–1704) called Virginalia: Laudes aeternae Virginis Mariae (“Eternal praises of the Virgin Mary”). The collection contains sacred songs for five voices addressed to the Blessed Virgin, including one for each of the fifteen Mysteries of the Rosary. For this concert, the Schola will perform Aichinger’s songs concerning the Joyful Mysteries: five events from the Bible surrounding the birth of Jesus Christ, beginning with the Angel Gabriel’s announcement of his conception and ending with his teaching in the temple as a young boy. The program will also include Gregorian chant and selections from the organ repertoire on the subject of these Mysteries, played by Director of Music David J. Hughes.The concert will be performed in St. Mary’s Church at 3:00 p.m. Admission is free of charge, though donations will be gratefully accepted. All proceeds will benefit the sacred music program at St. Mary’s and make more concerts possible in the future. A light reception in the church hall (school building) will follow the concert.Solemn Vespers & Benediction will also be sung in the church at 5:00 p.m. (as it is on the first Sunday of every month) after the concert and reception.
Community and Parish Activities, Concerts at St. Mary's, Music
Staff
No tags