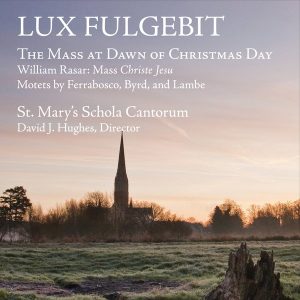 The St. Cecilia Society of St. Mary's Norwalk is proud to announce the professional recording debut of our own Schola Cantorum! Lux Fulgebit: The Mass at Dawn of Christmas Day features the world premiere recording of the 16th-century Mass Christe Jesu by William Rasar, in the context of a sung Mass in the traditional rite (Extraordinary Form).

CDs are available for purchase at St. Mary’s Bookstore.
All proceeds go to support sacred music at St. Mary’s.
Orders via email and special bulk orders are also available—please contact us!

FAQs
What music is included on the CD?
What is the “Mass at Dawn”?
What does “Lux fulgebit” mean?
What is the Mass Christe Jesu?
Who is William Rasar?
Is it possible to hear an excerpt of the CD?

What music is included on the CD?
The CD is the “soundtrack” of a sung Mass as it is done at St. Mary’s Norwalk on Sundays and feast days. Everything musical that takes place in the Mass is included, from the bells to the organ, the Gregorian chant, and the choral polyphony. The readings and chants all come from the Mass at Dawn of Christmas Day, and the polyphony featured is the Mass Christe Jesu by William Rasar, with motets by William Byrd, Alfonso Ferrabosco, and Walter Lambe.

What is the “Mass at Dawn”?
The Mass at Dawn is the second Mass of Christmas Day. Most feasts in the Roman rite have one proper set of readings and chants, but Christmas, almost uniquely, has three sets: one to be sung at midnight, one at dawn, and one for masses during the day. The Masses for Midnight and during the day have been recorded numerous times before, while the Mass at Dawn is less commonly heard.

What does “Lux fulgebit” mean?
“Lux fulgebit” is from the first line of the proper texts for the Christmas Mass at Dawn. The Introit for the Mass begins with “Lux fulgebit hodie super nos” (“A light shall shine upon us this day”), a line from Isaiah’s prophecy of the coming of the Messiah. This is the culmination of the imagery that pervades Advent (the four weeks preceding Christmas), which depicts the world in darkness, longing for the dawn, and repeatedly figures the birth of Jesus as the light in the East. At this special Mass, these words are to be sung just as the sun is rising.

A light shall shine upon us this day: for the Lord is born unto us: and He shall be called Wonder-Counselor, God-Hero, Father-Forever, Prince of Peace: of Whose reign there shall be no end.

What is the Mass Christe Jesu?
The Mass Christe Jesu is a sixteenth-century English setting of the Mass Ordinary for five voices, which is found complete in the Forrest-Heyther partbooks (Bodleian Library) and incomplete in the Peterhouse partbooks (Cambridge University Library). It is the only extant composition of William Rasar, and is of very high musical quality. The model of the Mass is unknown or lost, and there are a couple of other features of the Mass that are unusual for the period: the entire text of the Gloria and Credo are set, and the Mass is entirely in duple meter.

Who is William Rasar?
William Rasar is an obscure composer who was active in the early sixteenth century. The only dates known with certainty about him are his tenure as a boy chorister at St. George’s Chapel, Windsor, from 1499 to at least 1504, from which his birth year can be estimated as 1491, and his time as a clerk at King’s College, Cambridge, 1510–c. 1515. His only known surviving composition is the Mass Christe Jesu, which survives in two sets of partbooks.

For more about the revival of the Rasar Mass, view the CD Launch program or the CD liner notes.

Is it possible to hear an excerpt of the CD?
Yes! The full Credo and the full Agnus Dei from the Rasar Mass can be heard on YouTube. Our CD promo video also features a short excerpt of the Benedictus.

"A remarkable debut...a must for anyone interested in Tudor polyphony and recommendable to anyone who cherishes the Latin Mass."
—Fanfare

“All the more surprising that, with the current flurry of interest in Peterhouse repertory, this is the premiere recording of Rasar’s mass. It is a revelation….glorious music and [a] committed and spiritual performance by the Schola.”
—Early Music Review

“This is the first CD released by the parish's Schola Cantorum, and I hope it is not the last. This recording…is a great spiritual and historic accomplishment.”
—Stephanie A. Mann, Supremacy and Survival blog

Society of St. Hugh of Cluny