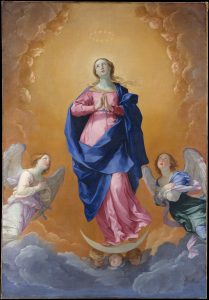 FREE ADMISSION
Followed by a light reception
and Solemn Vespers & Benediction at 5:00 p.m.

Part of the Rosary Concert Series at St. Mary’s,
this concert-meditation will feature a baroque violinist in Biber's "Mystery Sonatas"

NORWALK, CONN., April 20, 2018—St. Mary’s Church and the St. Cecilia Society are delighted to announce the third and final installment of the Rosary Concert Series, dedicated to the Glorious Mysteries, on Sunday, May 6, 2018 at 3:00 p.m. at St. Mary’s Church, 669 West Avenue in Norwalk, Connecticut.

This final concert falls in Eastertide and in May, known as the “month of Mary,” a doubly fitting time to highlight the five Glorious Mysteries of the Rosary, which begin with the Resurrection of Jesus Christ and end with the Assumption and Coronation of the Blessed Virgin Mary.

The program for “The Glorious Mysteries” is drawn from a collection of violin sonatas by Austrian composer Heinrich Ignaz Franz von Biber (1644–1704), which are usually referred to as the “Rosary Sonatas” or the “Mystery Sonatas.” The collection contains fifteen sonatas, each of which is a meditation on one of the fifteen mysteries of the Rosary (presumably intended for performance at special rosary processions in Salzburg). Each sonata has not only a distinct character, but its own distinct re-tuning of the violin strings, or scordatura, allowing for unusual resonances on the instrument. The scordatura tunings and the technical difficulty of these pieces made them some of the most virtuosic violin compositions of their time. This concert will feature the final set (Sonatas XI-XV), which combine sacred reverence with joyful dances, reflecting the scenes of life, renewal and transcendence found in the Glorious Mysteries.

The soloist for this concert will be baroque violinist Leah Gale Nelson, who has performed the Mystery Sonatas widely for over a decade and has also recorded the complete collection for Lyrichord Discs. Nelson is particularly known for her refined and artistic interpretations of baroque and classical music. She is based in New York City and has performed throughout North America and Europe. Her artist website can be found at www.leahgalenelson.com. Nelson will be accompanied by Dongsok Shin on chamber organ and Daniel Swenberg on theorbo. Both artists are featured on Nelson’s recording of the Biber sonatas, and are sought-after continuo players based in the New York metro area. Patricia Ann Neely (violone) will also join the players for Sonata XII, The Ascension.

The concert will be performed in St. Mary’s Church at 3:00 p.m. Admission is free of charge, though donations will be gratefully accepted. All proceeds will benefit the sacred music program at St. Mary’s and make more concerts possible in the future. A light reception in the church hall (school building) will follow the concert.

Solemn Vespers & Benediction will also be held in the church at 5:00 p.m. (as it is on the first Sunday of every month) after the concert and reception.