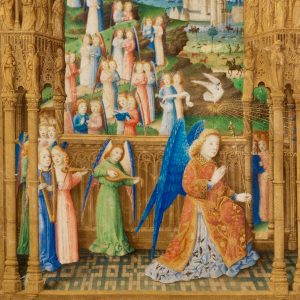 Music of Byrd, Taverner, Tallis, Palestrina, Victoria, and others in 16th-century arrangements from the manuscripts of Edward Paston

A benefit concert for the St. Cecilia Society. Donations will be gratefully accepted, with proceeds benefiting the sacred music program.

The soprano and lute duo will perform their program, “Ye Sacred Muses: The Musical Treasury of an English Catholic Gentleman”

NORWALK, CONN.—St. Mary’s Church and the St. Cecilia Society are pleased to announce a free recital on Sunday, November 24, 2019 at 3:00 p.m. at St. Mary’s Church, 669 West Avenue in Norwalk, Connecticut.

Charles and Elizabeth Weaver are both members of the Schola Cantorum, the professional ensemble that sings at the 9:30am Sunday Mass at St. Mary’s. Mr. Weaver is a sought-after performer on early plucked instruments. He teaches Lute and Music Theory in the Historically Informed Performance program at the Juilliard School. He is currently a PhD candidate in Music Theory at the Graduate Center of the City University of New York. Mrs. Weaver has been praised by the Washington Post for her “angelic brightness and dedication” and the “remarkable clarity” of her declamation, and the New York Times called her singing “truly lovely.” She has recently appeared as a soloist with the Masterwork Chorus, Voices of Ascension, Bach Vespers at Holy Trinity, and TENET, and has also performed and recorded with early chamber ensembles such as Pomerium and New York Polyphony.

The duo will perform their program, “Ye Sacred Muses: The Musical Treasury of an English Catholic Gentleman,” featuring music from the late 16th-century manuscripts of Edward Paston. Paston’s extensive collection of music includes several hundred arrangements for a single voice and lute. Many of these are arrangements of grand, large-scale works from the bygone era of Catholic England (including works of composers such as John Taverner and Thomas Tallis), as well as famous sacred and secular music from abroad in Europe (e.g. Palestrina and Victoria). The collection also heavily features the music of Paston’s friend William Byrd, a Catholic composer beloved of Queen Elizabeth I, and one of the greatest geniuses of English music history.

The concert will be performed in St. Mary’s Church at 3:00 p.m. Admission is free of charge, though donations will be gratefully accepted. All proceeds will benefit the sacred music program at St. Mary’s and make more concerts possible in the future.