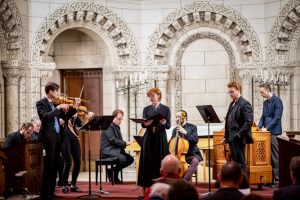 17th-c. Passion Oratorio performed by the Academy of Sacred Drama

The NYC-based Academy of Sacred Drama presents the modern premiere of
La vittima d’amore (The Victim of Love), a Passion oratorio from 17th-century Italy

NORWALK, CONN.—St. Mary’s Church and the St. Cecilia Society are delighted to announce a special concert event on Friday, February 21, 2020 at 7:00 p.m. at St. Mary’s Church, 669 West Avenue in Norwalk, Connecticut.The Academy of Sacred Drama is an artistic and intellectual community dedicated to the exploration of the forgotten cultural treasures of sacred dramatic music. The Academy’s 2019–2020 season features the work of Italian composer Antonio Gianettini (1648–1721), who was maestro di cappella at the court of the Duke of Modena. Gianettini was one of the most celebrated opera and oratorio composers of his time, whose name is now undeservedly overlooked. More information about the Academy’s season of concerts (performed in residency at Calvary–St. George’s Episcopal Church in New York City, as well as other churches in the metro area) can be found at sacreddrama.org.La vittima d’amore, osia La morte di Cristo (“The Victim of Love: that is, The Death of Christ”) was written in 1690 and was one of Gianettini’s most popular works. It is an oratorio for three voices on the subject of the Passion, with a libretto by Francesco Torti (1658–1741). La vittima d’amore presents a conversation between Jesus Christ, the Virgin Mary, and St. John that emphasizes the pain of Mary and John in accepting Christ’s sacrifice on the cross and the universal implications of that sacrifice. The first half of the oratorio occurs prior to Christ’s crucifixion, and depicts Mary and John asking Jesus to let one of them take his place. The discussion around Christ’s refusal sheds light on the nature of his sacrifice. In the second half, Christ ascends to the cross, and his nature is described as victim, priest, altar, and God. The oratorio concludes with the biblical sequence of Christ’s final moments on the cross, and ends with a chorus of Angels.Andrew Leslie Cooper (countertenor) sings the title role of Christ, with Madeline Healey (soprano) as the Virgin Mary and Corey Shotwell (tenor) as St. John. Choreographer Tony Lopresti collaborated with the Academy to add movement and gesture to the oratorio. Music director and violinist Jeremy Rhizor leads an ensemble of eight instrumentalists, including Lewis Baratz, recorder; Chloe Fedor, violin; Dan McCarthy, viola; Arnie Tanimoto, cello; Joshua Stauffer, theorbo; Marc Bellassai, harpsichord; and Parker Ramsay, organ. Fr. John Ringley, pastor of St. Mary’s Church, will give a short sermon between the two halves of the oratorio, as would have been done when it was originally performed.The concert will be performed in St. Mary’s Church at 7:00 p.m. Admission is free of charge, though donations will be gratefully accepted. All proceeds will benefit the sacred music program at St. Mary’s and make more concerts possible in the future.