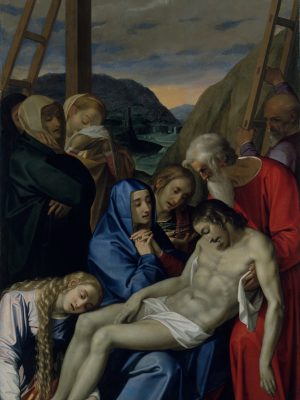 Elizabeth and Charles Weaver (soprano and lute) will present a concert-meditation of 16th- and 17th-century arias and cantatas on the subject of the Passion.

Part of the Rosary Concert Series at St. Mary’s,
this concert-meditation will feature soprano and lute

For Immediate ReleaseContact: Thomas B. Heckel, Chairman, St. Cecilia SocietyTel.: (203) 656-2389E-mail: theckel51@gmail.comNORWALK, CONN., March 1, 2018—St. Mary’s Church and the St. Cecilia Society are delighted to announce the second installment of the Rosary Concert Series, dedicated to the Sorrowful Mysteries, on Sunday, March 18, 2018 at 3:00 p.m. at St. Mary’s Church, 669 West Avenue in Norwalk, Connecticut.This concert falls on Passion Sunday, which begins the final phase of Lent, leading into Holy Week. The Sorrowful Mysteries of the Rosary are a powerful meditation on the Passion, the suffering of Jesus Christ that began with the Agony in the Garden of Gethsemane and ended with the Crucifixion.The performers for this concert are Elizabeth Baber Weaver (soprano) and Charles Weaver (lute), who are both parishioners at St. Mary’s as well as members of the St. Mary’s Schola Cantorum, a professional ensemble of five voices that provides music every week for Masses in the traditional form of the Roman Rite. Elizabeth Weaver is a soprano specializing in early music whose singing has been praised by the Washington Post for “angelic brightness and dedication,” and called “truly lovely” by the New York Times. Charles Weaver is a sought-after chamber musician and soloist on early plucked instruments, which he teaches at the Juilliard School along with historical music theory. He also directs early opera and is assistant director of music at St. Mary’s.The subject of Christ’s Passion has provided the inspiration for centuries of musical masterpieces. The Weavers will present devotional arias and cantatas from 16th- and 17th-century Italy, including works by Benedetto Ferrari, Francesca Caccini, and Luigi Rossi. These pieces, rather than being liturgical works for the Church, are more personal expressions of faith, meant to increase the intensity of prayer.The concert will be performed in St. Mary’s Church at 3:00 p.m. Admission is free of charge, though donations will be gratefully accepted. All proceeds will benefit the sacred music program at St. Mary’s and make more concerts possible in the future. A light reception in the church hall (school building) will follow the concert.The third and final installment in the Rosary Concert Series, “The Glorious Mysteries,” will feature baroque violinist Leah Gale Nelson with the Mystery Sonatas of Heinrich Ignaz Franz von Biber (Sunday, May 6 at 3:00 p.m.)