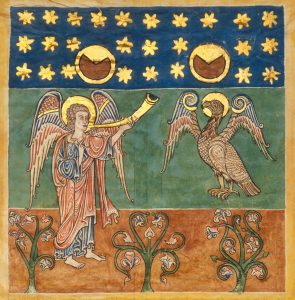 Recital by Terrence B. Fay, tenor and trombone
with Alexis Zingale, piano

Songs and arias by Mozart, Haydn, Schubert, and Wolf; works for trombone by Hindemith, Genzmer, and von Weber

Save the Date: Sunday, Nov. 24 at 3pm
Recital by Elizabeth & Charles Weaver

The multitalented Terrence Fay will perform works of Mozart, Haydn and others as both singer and trombonist

For Immediate ReleaseContact: Thomas B. Heckel, Chairman, St. Cecilia SocietyTel.: (203) 656-2389E-mail: theckel51@gmail.comNORWALK, CONN.—St. Mary’s Church and the St. Cecilia Society are pleased to announce a free recital on Sunday, October 6, 2019 at 3:00 p.m. at St. Mary’s Church, 669 West Avenue in Norwalk, Connecticut.The multitalented Terrence B. Fay is an active singer, instrumentalist, composer, and conductor. He is a member of St. Mary’s professional Schola Cantorum (which has premiered several of his choral works) and a frequent tenor soloist in the region. As a trombonist, he is a member of the New Haven, Eastern Connecticut and New Britain Symphony Orchestras. He holds degrees from the Juilliard School and Yale School of Music, and also studied at the Royal Academy of Music in London. He is on the faculty of the Neighborhood Music School, Choate Rosemary Hall, and the Universities of Bridgeport and New Haven.Mr. Fay’s eclectic program, “Austrian Voices & German Bones,” will feature vocal music from the Classical and Romantic eras (including arias from Haydn’s Creation and Mozart’s Don Giovanni, and lieder by Schubert and Wolf), interspersed with virtuosic works for trombone (including sonatas by Hindemith and Genzmer and the “Romance” of Carl Maria von Weber). Mr. Fay will be accompanied by Alexis Zingale on piano.The concert will be performed in St. Mary’s Church at 3:00 p.m. Admission is free of charge, though donations will be gratefully accepted. All proceeds will benefit the sacred music program at St. Mary’s and make more concerts possible in the future.A light reception in the church hall (school building) will follow the concert.