Dedication of the Shrine of Our Lady of Norwalk 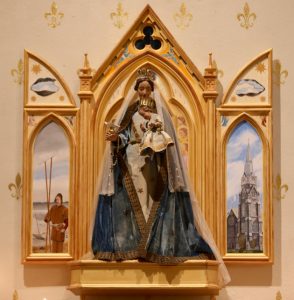 NORWALK — Oysters, with their mottled shells, succulent flesh and hard-won pearls, encapsulate the spirit of Norwalk.

At least they do for Rev. Richard Cipolla, the pastor of St. Mary’s Roman Catholic Church - and given the city’s rich oystering tradition, it’s likely others agree. So when the time came to dedicate the shrine for Our Lady of Norwalk at the church on Wednesday evening, it was only fitting to celebrate with an oyster reception. (read more)

Society of St. Hugh of Cluny: "Dedication of Our Lady of Norwalk Shrine" (with photos)

Yesterday evening at St. Mary’s in Norwalk a shrine for the statue of Our Lady of Norwalk was unveiled and dedicated. The local artists who created the shrine were in attendance, Henry Egan, artist, and Alonso Florez, master woodworker. Also in attendance was Harry Rilling, the Mayor of Norwalk. Fr. Cipolla explained the iconography of the statue and shrine. “The oyster shell she holds in the symbol of Norwalk, oysters having a particular symbiosis with the city. The Child holds a pearl, for it is He who is the Pearl of Great Price, who died and rose that we might live.” (read more)

Fr. Cipolla: Sermon for the Dedication of the Shrine of Our Lady of Norwalk

Summer for me as a child meant spending time at my Uncle Frank’s beach house near Scarborough beach on the Rhode Island shore and going out with him to dig for clams at low tide.  We would bring them back to his house and then have little necks on the half shell with lemon and Tabasco sauce.  I grew up with steamers and quahogs and Rhode Island chowder, which is the real thing because in Rhode Island chowder there is no milk or, even worse, tomato to pollute the essence of the clam broth. But it was not until later that I discovered the oyster and the silken mystery that it is.  The shape of the shell and the texture of the shell made them more interesting for me than little necks.  And when I learned about how a pearl is formed in an oyster, how the oyster removes the irritation caused by a grain of sand or something else that has found its way into its hiddenness, removes it by secreting a substance called nachre and covering the source of irritation, and the result is the beauty of a pearl.  Beauty is the result of pain and suffering. (read more)