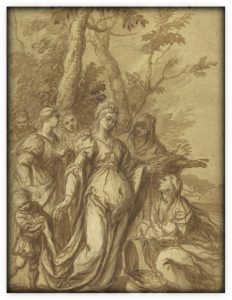 The St. Cecilia Society is delighted to present this special concert event featuring the Academy of Sacred Drama with the modern premiere of the oratorio "Il Nascimento di Mosè" (1682) by Vincenzo de Grandis.

Free Concert at St. Mary’s, Norwalk:
The Academy of Sacred Drama presents "The Birth of Moses"
(Friday, September 14 at 7:15 p.m.)

The Academy of Sacred Drama is an artistic and intellectual community dedicated to the exploration of the forgotten cultural treasures of sacred dramatic music. This program is the inaugural concert of the Academy’s incredibly ambitious Year of Moses, which features the modern American premieres of three Italian-Baroque oratorios (all with librettos by Giovanni Battista Giardini). More information about this season’s oratorios and salon concerts can be found at sacreddrama.org.

Vincenzo de Grandis’s 1682 oratorio Il Nascimento di Mosè (The Birth of Moses) was dedicated to Duke Francesco II of Modena, and was first performed for a Modenese audience at the oratory of San Carlo rotondo. Giardini’s libretto tells the harrowing story of Moses’s birth as a slave in Egypt, when the tyrannical Pharaoh, fearing the growing power of the Hebrews, had ordered that all male new-borns were to be thrown into the river Nile. The Academy’s performance will feature five voices and seven instrumentalists, as well as a brief talk at intermission about the original context of the oratorio.

Violinist Jeremy Rhizor, founder and director of the Academy of Sacred Drama, describes its music and its mission: “Seventeenth-century oratorio combined the tremendously popular music of the opera with stories chosen for the intellectual and spiritual enrichment of its listeners. The Academy continues this mission by uniting emotion, intellect, and community in presentations that incorporate great oratorios, contextual lectures, and community receptions. From the philosophical and storytelling lens of Baroque-era sacred dramatic music we learn from history, share the rich ideas and music of past ages, and re-imagine the place of art and music within our own communities.”

The concert will be performed in St. Mary’s Church at 7:15 p.m. Admission is free of charge, though donations will be gratefully accepted. All proceeds will benefit the sacred music program at St. Mary’s and make more concerts possible in the future. A light reception in the church hall (school building) will follow the concert.